Albany Park To Get Facility Improvements


Albany Park to Get Facility Upgrade

Plans to upgrade Albany Community Park are moving forward.  The facility is scheduled to receive improved access, parking and ADA compliant pathways as part of a community project.

The project will focus on creating full and equitable access to the park for individuals with physical disabilities. Upgrades will include a series of wide concrete walkways and several paved parking spaces designed to comply with the Americans With Disabilities Act.

Albany Mayor, Eileen McCarroll, who is in the class and part of the project group notes, “As the group was brainstorming on a project, each of us submitted a need we were aware of in our areas.  When the group voted to adopt the park in Albany, I was humbled and excited by what this means for our community.  The park is a major asset to the Town of Albany.”

This is not the first time the park in Albany has caught the attention of community minded members of the Leadership Livingston Program.  The park went from concept to reality courtesy of a prior class in the program and Leadership Alumni.

Chamber President, April Wehrs states, “Many do not realize the history and connection the Leadership Livingston Program and Chamber has with this park.  It was originally adopted by our Leadership Class of 2016 who fund raised, brought awareness and saw the park through from an empty field to what it is today. That group was responsible for and coordinated having the pavilion built, the playground equipment installed and improvements to the rest room facilities.  We are proud to be a part of the park continued improvements.”

The Leadership Livingston Project Group is responsible for organizing the renovation, assisting with supplies and raising funds for the project.  The Town of Albany is set to oversee construction and compliance of the improvements. The layout will also incorporate a hand-painted mural designed to visually engage park visitors. Albany Mayor Eileen Bates-McCarroll indicated the proposed improvements will likely act as a catalyst for a series of long-term, Town-sponsored upgrades to the park.

Albany Community Park is currently the only public recreational area located in Livingston Parish’s 4th ward, and, as such, it serves as an important gathering place for many local families. Construction is expected to commence in early May and end before July. Once the project is completed, the Town of Albany and the Livingston Parish Chamber of Commerce will host an unveiling. 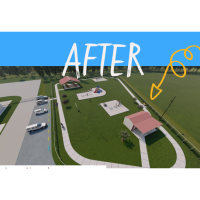